Unlike us in Europe, in Russia the production of bread drinks is known as a fermented drink. In Russia, the lactic fermented drink made from whole grain bread has been used for centuries to treat many ailments.

German soldiers in particular learned to appreciate the sour-tasting potion during captivity, because those who consumed it were less likely to fall ill. Today, the health-promoting effect of the probiotic drink is widely known and it is used especially for intestinal problems. 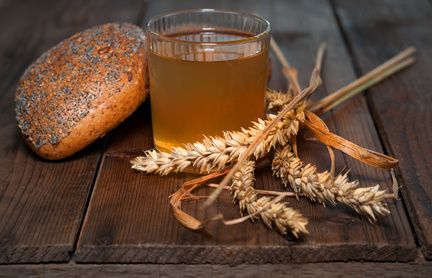 Today, “Brottrunk” is understood to be a protected trademark produced according to a recipe tested by master baker Wilhelm Kanne. The idea came to the master baker when he heard about the fermented drinks from prisoners of war in the Soviet Union. It was only in 1981, after 15 years of experimentation, that Kanne’s Bread Drink was first launched on the market. This “bread drink” uses organically grown wheat, rye, oats and water – in the form of bread – and subjects them to a fermentation process that lasts for months.

However, fermented beverages made from a wide variety of grains can be purchased not only in health food stores and drugstores, but also made yourself.

In terms of taste, bread drinks are most reminiscent of a fermented vegetable juice – for example, a sauerkraut juice, which, although labeled “sour,” is alkaline in the body.

The basic recipe for bread drinks is always similar and includes water and whole grain bread. Alcohol is not used. The whole grain bread may have been made not only from wheat, rye or spelt, but also from gluten-free grains such as amaranth.

The fermentation is caused by lactic acid bacteria and the lactic acid produced causes the lowering of the pH and the sour taste of the drink.

Besides positive effects on the gastrointestinal tract (both for flatulence, for constipation, and for diarrhea), the

But the fermented beverage is also said to help in the treatment of chronic skin problems, hay fever, asthma and acne, as well as a tendency to infection.

The fermented drink has few calories and thus the bread drink is well suited as a tart summer drink and brings variety to fruit juices, teas and water.

Bread drinks can be drunk daily without hesitation, preferably with meals.

How the lactic acid bacteria affect our digestion, you can read here: https://www.getreidemuehle.com/de/milchsaeurebakterien-als-darmpflege/