BPA – The box or Pandora’s can

When we hear the phrase “opening Pandora’s box,” we automatically think of possible, coming disaster. The phrase originated from a myth and expresses that disaster is in the offing when you “open the box”, as the saying goes. 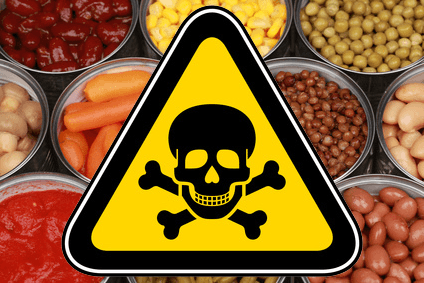 Today you might say you shouldn’t open a can of food .

Bisphenol A, or BPA, is one of the most widely used (millions of tons) industrial chemicals in the world. It is common knowledge that the hormone toxin bisphenol A is present in many everyday products, but it can also be found in canned foods, as random samples have shown.

Bisphenol A in canned foods

BPA is used for the production of epoxy resins. These plastics are often used to line food cans to prevent corrosion.

Various studies wanted to determine how much BPA from these coatings transfers from the inside of the can to food.

Ca.74 Percent of the food samples tested were contaminated!

Various influences such as storage temperature, heating, fat content, acidity can affect the migration behavior of BPA. Different concentrations can occur, making it difficult to calculate how much BPA is in a can.

At the same time as the study conducted by the federal government, studies were conducted by Global 2000, with a similar result. These studies also found a level of 318 micrograms per kilo of coconut milk. In tuna, a value of 140 micrograms was found.

Parallel investigations by Global 2000 led to similar results: here, too, the highest value of 318 micrograms per kilogram was found in a canned coconut milk,

It is reported that health hazards from consumption of a contaminated canned food are not to be feared. However, the risk increases with frequent consumption of preserved foods.

As informed by the European Food Safety Authority (EFSA), consumers absorb BPA primarily through canned foods. Exposure to other products containing BPA such as should be considered. Thermal paper (cash register receipts), various adhesives, etc. are among them. In addition, there is exposure to other BPA-containing products, such as thermal paper (cash register receipts), adhesives, div. Tableware.

The effects of BPA ( similar effect to the hormone estrogen) have already been reported in all media.

A ban on the hormone toxin BPA in the EU is called for. Not only politicians but also manufacturers should face up to their responsibility.

What you can do against BPA: Buy fresh products without packaging, prefer jars instead of cans.